i know, it sounds crazy, but it’s really only decadent. it was just one of those filled with errands and crap you just don’t want to do. as evening rolled around, i decided that i deserved a treat, something savory but fun and that might pass for dinner under a blurry microscope. i thought about a grilled cheese sandwich but the cupboards were kind of bare and i was out of bread, but there is always flour, butter, some kind of milk and of course bacon. 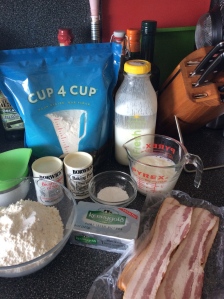 these are kitchen staples. biscuits, came to mind, but how to jazz them up. i had some lovely bacon from D’Artagnan leftover from breakfast and decided to try something a little bit off the wall. I mixed up some biscuit dough in the food processor,

and cut it out in rounds.

then i took my boning knife and split each round into two rounds and sandwiched the bacon between the rounds. 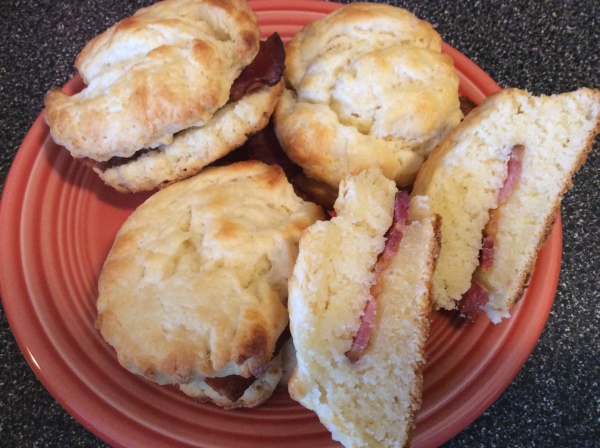 4-8 slices of thick bacon, cooked and cut in half. (use really good bacon and make sure it’s cooked all the way through, but not crisp)

Pour in the buttermilk. Pulse until dough just comes together but does not form solid mass otherwise biscuits may not rise as well. Turn dough out onto lightly floured surface (I use a silpat). Gently pat out dough to 1-inch thickness.

Using a 2-1/2-inch round cutter (or the open end of a drinking glass), cut out the biscuits. Dough trimmings can be gently pushed together, patted out and cut one more time.

With a very sharp knife slice the split the biscuit in half, horizontally and place 1 or two pieces of cooled cooked bacon between the two biscuit halves.

Place biscuits, 1-inch apart, on a parchment or silpat lined baking sheet. Brush tops of biscuits with the remaining tablespoon of buttermilk.

Bake on middle rack for15 to 18 minutes, rotating pan halfway through, until golden. Makes about a half dozen biscuits.